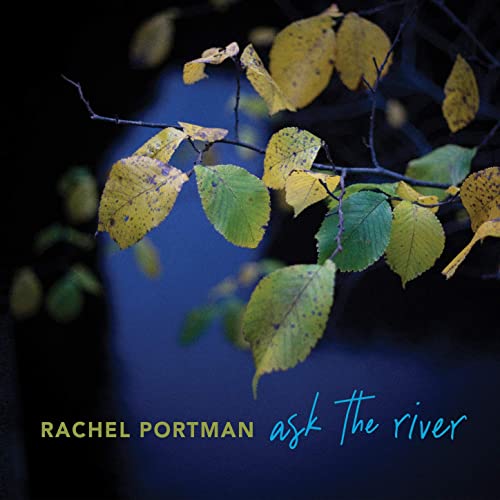 “ask the river” is exceptionally composed and performed. It was a thrill to listen to. She is working at a high level of artistry not reached by many composers.” – Philip Glass

“Her frequent collaborator, director Douglas McGrath, quotes a line about Truman Capote from the movie Infamous: “'When you look at a candle, at its bright flame, at the center there’s always that little touch of blue.' And I think that’s true in Rachel’s music." – NPR’s All Things Considered

Rachel Portman, the Academy Award-winning composer and pianist, releases her debut lyrical all-instrumental collection, ask the river, out today, Friday, May 8, via Node Records, and available HERE on all streaming platforms.

Portman is best known to listeners for her musical scores heard in more than 100 major motion pictures. She received an Oscar for her work on Douglas McGrath’s 1996 adaptation of Jane Austen’s Emma, and also collected nominations for the scores for Lasse Halleström’s The Cider House Rules (1999) and Chocolat (2000). Her music for the HBO television feature Bessie (2015) was honored with a Primetime Emmy Award.

With ask the river, the British musician steps to center stage for the first time, with an album of thematically related pieces inspired by her closely held personal concerns.

She says, “I have a deep interest in environmentalism and protecting the natural world that surrounds us. I’ve written quite extensively and been involved in concert work about the environment and about listening to the earth. I also have a desire to work on projects where I’m free to create my ideas from scratch. I’ve been on this trail for quite a while but hadn’t ever put together an album of my own work and performed it myself.”

Several earlier compositions by Portman have addressed the subject matter that underlies ask the river. In 2007, The Water Diviner’s Tale, a choral symphony written with Owen Sheers, was commissioned for the BBC Proms concerts. The orchestral piece Endangered debuted at the World Environmental Day Concert in Beijing in 2012. And Earth Song, penned with poet Nick Drake, was commissioned for and performed by the BBC Singers in 2019; its libretto drew from Greta Thunberg’s headline-making address at the 2019 World Economic Forum in Davos.

Portman spent 18 months composing 13 new pieces, which palpably conjure up the setting in which they were written.

“I split my life between London and the countryside,” she says, “spending a lot of time on a small farm which I am gently in the process of rewilding - so no intensive farming practices - with a view to encouraging regeneration of bird and insect life. It has a stream running through it, and when I’m there I can lose myself amongst the trees, in the grasses and under the sky. That really has been my inspiration for ask the river along with a desire to feel deeply connected within nature – for me, it’s about respecting nature as part of ourselves.”

Not only did Portman write and produce ask the river, but she also took the unprecedented step of playing piano on the recording.

“I’ve never performed before,” Portman says. “I’ve always been behind the scenes. It’s an absolute first for me. While I play the piano most of every day because it’s the friend that I’m with as I’m writing, I’ve never put myself forward to do that on a recording. I realised with this collection of personal pieces that I had to do it. These are very much my pieces, so it needed to be me who was expressing them.”

“They’re the cream of players in London,” Portman says. “Clio Gould is an absolutely stunning soloist who has a deep understanding of nuance in music. Playing with her, she immediately and intuitively picks up what to do with the violin, and has been sympathetic to the nature that is flowing out of the music. Both she and Caroline Dale have an extraordinary natural ability to be attuned to a piece of music. I hardly have to say anything. They played so reflectively, just breathing along with the music so easily. They were incredible.”

The release of ask the river was prefaced by the release of lead-off track “leaves and trees,” and an accompanying music video that you can watch HERE. The piece then debuted in March at England’s Hastings International Piano Festival, as part of a larger retrospective of Portman’s work. The recorded version features her intricately overdubbed piano work. Also released is “much loved,” watch video HERE, and “a gift” on YouTube HERE.